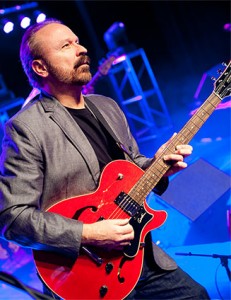 Celebrating over 30 years of musical accomplishments, virtuoso lead guitarist Daryl Stuermer of the super-group Genesis and Phil Collins has been touring the world to sold out crowds since 1978.

Discovered while playing with his Milwaukee band, Sweetbottom, guitarist Daryl Stuermer made a fan out of Frank Zappa’s then-keyboardist, George Duke, who set up an audition for Stuermer to try out for acclaimed jazz violinist Jean-Luc Ponty. Stuermer burst into the international music scene, joining Ponty on an European tour and then recording on his four innovative albums.

In late 1977, Stuermer was recommended as a replacement for longtime member Steve Hackett for the British progressive rock super-group Genesis, beginning his 30 year “permanent part-time stint” as lead guitarist with Genesis, touring the world to sold-out crowds and performing on seven Genesis albums.

When Genesis drummer/singer Phil Collins launched a solo career during the early 80s, Stuermer became an integral member of the Collins’ solo band. Stuermer created the signature guitar sound of Collins’ solo mega hits “In the Air Tonight” and “Easy Lover,” and was co-writer of Collins’ 1989 GRAMMY® Award-winning and Billboard No. 4 single “Something Happened on the Way to Heaven.” Stuermer’s versatile jazz work can be heard on nearly all of Collin’s albums (all of which were major hits) including 1981’s Face Value, 1985’s No Jacket Required, 1990’s But Seriously and 1996’s Dance into the Light. In addition he’s performed on albums by Jean Luc Ponty, Frida Lyngstad (ABBA), Philip Bailey (Earth, Wind, & Fire), George Duke (Frank Zappa), and many others.

Daryl has performed at the SuperBowl, Academy Awards, Oscars, MTV Awards, VH-1 Rock Awards and the “You’ll Be in My Heart” Tarzan World-Wide Premier Tour.

Stuermer continues to expand on his accomplishments. In between the touring years, Stuermer launched his own independent record label, Urban Island Music, and continues to write music for his nine solo albums—Steppin’ Out, Live and Learn, Another Side of Genesis, Waiting in the Wings, Retrofit, The Nylon String Sampler, Rewired: the Electric Collection and Go! which showcases his acclaimed blend of rock and jazz guitar featuring original music, as well as unique Genesis renditions.

After completing a successful tour opening for Mike + The Mechanics in early 2015, (Mike Rutherford, being Daryl’s tour mate with Genesis), Stuermer returns to the recording studio in Summer 2015 to create his newest CD, “Breaking Cover.” Stuermer’s highly anticipated CD will be his newest release in five years, and celebrates Stuermer’s personalized renditions of some of the biggest hit songs of the century while showcasing Stuermer’s award-winning guitar skills.

Stuermer tours with the “Daryl Stuermer Band” performing in duo, quartet, five-piece and full symphonic shows throughout the world.