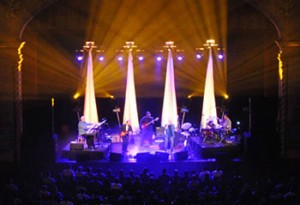 As co-writer of the Phil Collins 1989 Grammy Award Winning, Billboard No. 4 single “Something Happened on the Way to Heaven,” Stuermer continues to write music for his eight solo albums of original music and cover his favorite Genesis vocals and instrumentals along the way.

His band is an exciting fusion of Stuermer’s unique Genesis renditions, creating an unforgettable evening that reinvents the Genesis experience.