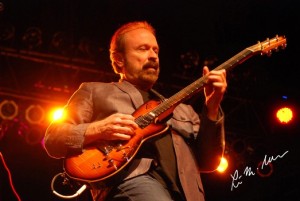 Many in the audience remembered Daryl from his days—decades, actually—as a touring member of Genesis (with drummer Chester Thompson). In fact, we used to wake up to Stuermer’s face every morning in high school.

To clarify: We had a Genesis poster picturing the group’s Domino Tour five-man lineup hanging inside our bedroom door from 1987 to our college sendoff, a concert souvenir from the Invisible Touch days.

Indeed, anyone who witnessed Genesis live from 1977 on has heard Stuermer play, whether they recognize his name now or not. Daryl also appeared on Phil Collins’ mega-successful solo albums of the ‘80s and ‘90; he’s the guy behind that brooding guitar in “In the Air Tonight” and the slick, shredding solos on radio hits “Don’t Lose My Number” and “Something Happened On the Way to Heaven.”

Brandishing a copper brown Godin guitar (like the one pictured on the 2007 CD Go) Stuermer astounded with a fleet-fingered rendition of Peter Gabriel’s “Shock the Monkey.” A laptop perched nearby provided all the bass, drums, and keyboards Daryl needed to fill the mix.

But his Godin did most of the talking.

Stuermer said he wasn’t sure Rutherford’s invitation to join him on the road included his own band. When he asked for clarification, Mike said, “Nah, we just want you.”

Thus the automated assistant, which Daryl himself triggered before riffing into each selection. “Wherever You Are” (from 2001’s Waiting in the Wings) was a lovely, legato-laden masterpiece. “Heavy Heart” commenced with gritty, distorted chords but segued into some sweet soloing by Stuermer.

As if his prodigious guitar chops and Genesis / Phil Collins ties weren’t enough to endear him to the Rocksino audience, Stuermer revealed his close-knit ties to Cleveland:

“My wife is from here,” he reported.

“She grew up in Lakewood. She went to Magnificat High School. She’s one of those wild catholic girls. That’s why I married her!”

Stuermer also recalled that Quicken Loans Arena (where Genesis played on the 2007 reunion tour) was formerly known as Gund Arena. He botched the name of the old Richfield Coliseum, referring to it as “Richmond Coliseum,” but hey, no biggie.

Stuermer’s last gig in these parts was a September 2013 benefit at Beachland Ballroom for the Hospice of The Western Reserve. So we reckon his generosity buys him lots of leeway when it comes to Ohio trivia.

Daryl shared memories of his nerve-wracking audition for Genesis in the late ‘70s, to fill the spot vacated by Steve Hackett—whom he praised as “an amazing guitarist.” Stuermer said the band provided him a demo cassette with five songs, including two new bits for what would become the …And Then There Were Three album.

“There was one with the working title ‘Calypso,’” he said. “That song ended up being ‘Follow You, Follow Me.’”

Another—dubbed “5/8” for its time signature—was renamed “Down and Out” for the record.

Stuermer said Rutherford wouldn’t let him finish any songs during the try-out, which disconcerted him at the time.

“He’d let me go on for a minute or two, then he’d turn off the tape. I thought I wasn’t good enough.”

“I think you’re the one,” Rutherford told him, welcoming him into Genesis’ extended family.

Other highlights were Stuermer’s fiery, fluid take on Police castaway classic “Message in a Bottle” and a raucous roll through the Jeff Beck / Max Middleton workout “Freeway Jam.”